Dividing Multiple of Ten and Hundred

When dividing by multiples of ten and hundred, always keep in mind that you can remove any zeros that aren't needed to do the division. What I mean is clearly stated below:

Let's try it out!

So, let's first figure out our previous example up above: 234/1
That means that now we must divide 234 by 1. It's really simple because anything you divide by 1 always equals the same thing. That means that the quotient to 2340/10 equals 234. Now, wasn't that easy?!

So, now that we have already covered dividing by tens, let's try dividing by hundreds!
For example, if we have 5670/100. Now remember to remove zeros. But we won't remove all the zeros because 5670 only has one zero. Therefore, we'll only remove one zero. So, now we have 567/10. Now just do simple division to receive your quotient. 567 divided by 10 equals 56.7 because when we are dividing by any multiple of ten or hundred, we just simply move the decimal point the amount of zeros in that multiple. So, in this case, we'll just move it once since 10 only has one zero. Therefore, our quotient to the original problem 5670/100 equals 56.7! 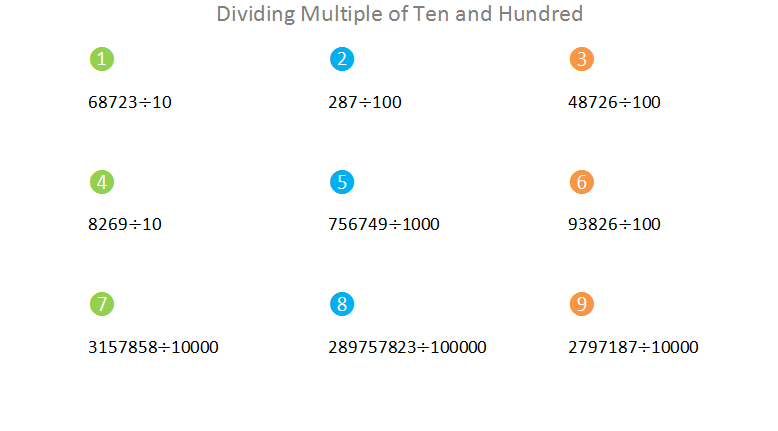 Sheet 1 Practice Problems on Dividing Multiples of Ten and Hundred