An angle or angles are types of measurements we use when two lines connect like this: 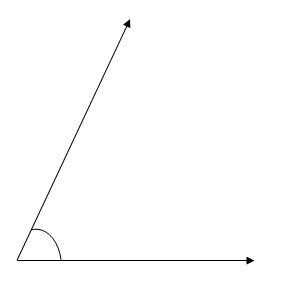 An angle also has degrees which defies the angles measurements. To make the angle to go all the way around it will be 360 degrees, half way around will be 180 degrees and a quarter way around will be 90 degrees. Angles also have names, The 90 degree angle is called the right angle and the angles less than 90 degrees are called acute angles. The angle which is 180 degrees and higher are called obtuse angles. Angles are used in many situations and jobs. One of the most important job that uses angles is construction worker s because they have to get all the measurements correct to make their design successful. Angles are also in shapes like for example the square has four right angles, and of course there multiple types of triangles and they all have different amounts of different angles but they all have three angles.
Posted by Unknown at 1:56 PM

Email ThisBlogThis!Share to TwitterShare to FacebookShare to Pinterest
Labels: 6th Grade Math define an angle, adjacent angles, all types of angles, angle degrees, angles in triangles, how to find the measurements of an angle, transversals, vertical angles, what is an angle